Like many of my generation, my early wine-drinking experiences incorporated Mateus Rosé. This sweet, fruity, inexpensive wine came in a really cool bottle with an old-world label. Mateus was the perfect choice for a picnic, tailgate or outdoor concert. What more did a young, inexperienced drinker need? 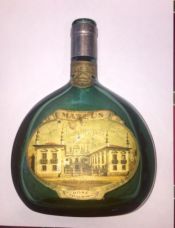 Despite the success of Mateus, wine connoisseurs were long biased against rosé, often shunning it as a frivolous “picnic” wine. Today, rosé is no longer the maligned wine varietal. The pinkish-hued wine has been gaining in popularity for several years, with people of all demographics joining the Rosé Revolution. Nielsen data showed +64% growth in rosé consumption from May 2016 through April 2017 (the overall wine category grew just +4% during the same period,) with dramatic, +84% growth in the final four weeks of the survey, even before the summer surge. 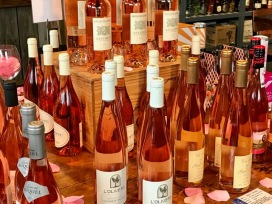 Younger drinkers have played a substantial role in the popularizing of rosé. The wine’s pink hues and easy rhyming sounds make it ideally suited for Instagram and other social media platforms. And the less intimidating image rosé conveys has clearly helped its rise– as Lorna Andrews, a fashion influencer and blogger notes: “you can lob a cube of ice into a glass of rosé without fear of vitriol and serve it with any food whatsoever.” It’s a drink that says ‘I don’t take life too seriously.’

Rosé wines are enjoying widespread appeal, and not just among millennials; these days, all demographic groups are drinking pink– from baby boomers to grandparents and even men who typically drink hard liquor (hence, the Brosé phenomenon.) In fact, research from the Provence Wine Council confirms that the U.S., Russia and Australia now have an equal number of male and female rosé drinkers, and Brazilian men apparently drink more rosé than their female counterparts!

Curious about this rosé revolution, I undertook some research to fill in the gaps in my knowledge. This research encompassed hands-on tasting, reading numerous articles and talking with local wine experts. A special thanks to Carol Todd of Wine Geeks in Armonk, NY and Noah Goldberg of The Study in Greenwich, CT for educating me about rosé. Here is some of what I learned.

What is the appeal of rosé and why is it so popular these days?

Rosé is very easy to drink and quite affordable. It is probably the easiest wine to pair with a wide variety of food. Rosé is perfect at a picnic, barbecue or clambake. It pairs beautifully with hamburgers, salmon, shrimp, lobster and countless salads. Food & wine critic, Peter Gianotti, notes that rosé also holds its own when served with spicier foods like Indian, Mexican, Italian tomato-based dishes or Thai cuisine. Rosé is a many-sided wine, making it highly adaptable to all tastes and palates. This versatility, coupled with its unassuming nature, enhances rosé’s likeability among all types of drinkers.

Further, as Noah Goldberg points out, rosé is drinkable as a current vintage­– that is, the grapes are harvested in the fall and the wine is ready to drink the following spring. Unlike many white wines like chardonnay, and especially red wines, which need to ferment for years before they are drinkable, rosés are typically consumed very young– helping us feel more connected to the wine. 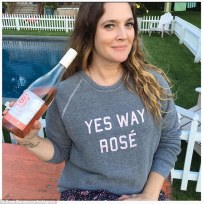 Rosé also enjoys a ‘beyond the bottle’ allure that traces to the celebrity/pop-culture factor, with a host of stars either producing their own rosé or promoting wines and related lifestyle brands. This rosé A list includes: Brad Pitt & Angelina Jolie, Martha Stewart, Drew Barrymore, Francis Ford Coppola and his daughter, Sofia, and rapper Wiz Khalifa just to name a few.

Rosé has been around for a long time. Why have we not heard much about it until recently?

Rosé wines originated in Provence, France but became popular on American shores after WWII with the launch of Portuguese brands Mateus and Lancers. These sweet rosés set record wine sales in postwar America. Next up was White Zinfandel and the wine spritzers of the 1980s,  which made domestic rosé production profitable.

As more Provençal wines entered the U.S., tastes began to shift. The drier Provençal rosés were found to be highly versatile and adaptable, doubling as both aperitif and complement to many cuisines. For over a decade, rosé wines from Provence have been trending steadily upward. In 2001, rosé imports from Provence to the U.S. were just 158,000 liters, compared with 11.5 million liters in 2016– this translates to a rise of 7,165% rise over the past 15 years! 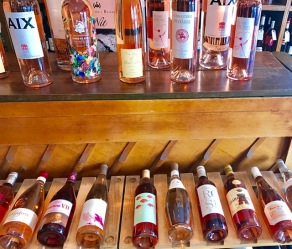 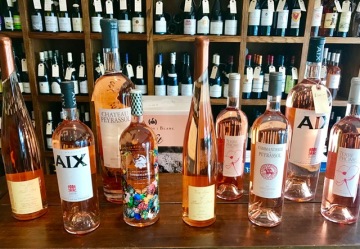 Today, the market has evolved to include many high-quality rosés from wine-making regions around the world. As people drink more rosé, they are venturing beyond the traditional strawberry and citrus staples for which Provence is known. There are also deeper, richer rosés that are more akin to the red wine experience, which has brought many red wine drinkers into the rosé fold. This proliferation of sophisticated wines from various regions has helped further legitimize rosé as a ‘serious’ wine.

When a winemaker desires more tannin and color to a red wine, some of the pink juice can be removed at an early stage via the saigneé method (from the French “bleeding.”) The red wine remaining in the vats is intensified as a result of the bleeding, and the pink juice that is removed can be fermented separately to produce rosé.

The third method, simply blending red and white wine to make rosé, is uncommon and is discouraged in most wine-growing regions, especially in France, where it is illegal. Still, some winemakers opt for this method– for example, Summer in a Bottle, a popular rosé made on Long Island, uses the blending method. 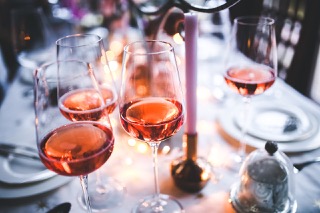 Rosé wines are made with either a single grape or, more often, with a blend of grapes; the grapes used will determine color and aroma. Thinner-skinned grapes like pinot gris or pinot noir yield a lighter colored rosé, while thicker-skinned grapes like cabernet sauvignon or syrah yield darker and richer rosés. Local factors from climate to soil will also significantly affect the resulting wine.

Is rosé just a refreshing summer beverage or can it be consumed year-round?

“Because it’s meant to be served chilled, it’s refreshing and it’s very pretty, rosé has been mostly marketed for summer. But that is quickly changing,” says Carol Todd, whose family drinks rosé year-round. Before all of its associations with beachside sunsets and cookouts, rosé had classically been a summer wine because of its production timing and limited quantities. It was typically released in the spring and would often go on sale after Labor Day, enabling distributors to sell all their rosé inventory by early fall. This created a more seasonal feel. However, given its increased production, rosé is now easier to find throughout the year, with an expanded selling season from March through November. With rosé consumption extending well into Autumn, rosé has become the perfect complement to Thanksgiving dinner, with traditional foods like turkey, cranberry and stuffing.

Is rosé just a fad or is it here to stay?

Noah Goldberg is confident that rosé is here to stay. He contends that a large part of rosé’s popularity is rooted in its associations with easy living, summertime and fun. The lighter blush rosés from France certainly fit that bill. However, Noah’s hope moving forward is that tastes in rosé wines continue to evolve beyond the traditional Provencal wines as wine drinkers learn to appreciate many rosés of ‘character’ from across the globe– including vintages from Spain, Argentina, Australia, Italy and Greece. With Noah’s prompting, I took home a bottle of Hentley Farm, a full flavored Australian rosé, and served it last night alongside our dinner of steak, salmon, veggies, potatoes and fresh berries. Much to our surprise, the rosé went beautifully with all the different foods and perfectly bridged the gap between red and white wine drinkers in the group. 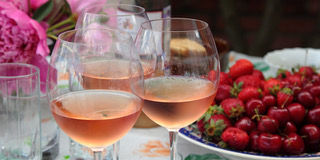 For those who think that rosé is merely a flash-in-the-pan, just look to France (the birthplace of rosé,) where rosé sales outstrip those of white wines. This has been the case since 2008, making rosé a dominant staple in the country’s culture and cuisine.

Rosé, it seems, can be many things to many people. Not only does it appeal to all types of wine drinkers, but also, rosé exudes a relaxed vibe and suits a variety of foods and occasions. After studying rosé in depth, I am left with one final thought:

Few things in life are less intimidating that a glass filled with something pink. 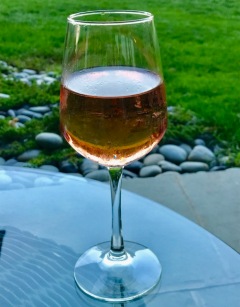 One thought on “Drink Pink!”