I just took my first lengthy “road trip” in many years. This road trip was unlike those I recall from my youth, when we headed to the beach or the mountains, or to a fun party in cars packed with friends, beer and munchies (DWI was not on our radar in those days.)

The daughter was prepared with her 400-song playlist, comprised of 90% county music, 10% rap/hip-hop and a few classic rock tunes mixed in. (Unfortunately, my playlist was vetoed after just two songs.)

The plan: to drive daughter and her car to Nashville, where she would spend the summer, and move her into her sublet apartment. Along the southwesterly route, mother and daughter made a total of seven stops.

Stop #1, just two hours into the drive, was a brief pit stop in Bethlehem, Pennsylvania.

Stop #2, after four hours, was at Starbucks in Harrisburg, Pennsylvania for a couple of “Skinny Vanilla Iced Lattes” and a quick lunch of chopped salads at a nearby Subway.

Stop #3, two hours later, was to refuel in Mill Creek Virginia.  Bonus: $34.20 for a full tank of premium gas!  Toto, I have a feeling we’re not in Westchester anymore…

Stop #4, eight hours into the trip, was to grab a quick snack and change drivers in Buchanan, Virginia.

Stop #5, after driving for 10 hours, was an overnight stay at the Hampton Inn in Bristol, Tennessee. We dined at a nearby Outback Steakhouse and may well have been the only customers ever to order grilled salmon and veggies.  Bonus: NY Rangers (before their demise) and Lebron on TV in the bar at Outback, which made the evening far more enjoyable!

Stop, #7, nearly 1-1/2 hours later, was to change drivers and use the facilities in Calvary, Tennessee.

After15 hours and 1-1/2 days in the car, with travel through seven states (New York, New Jersey, Pennsylvania, West Virginia, Virginia, Kentucky and Tennessee,) mother and daughter arrived in Nashville. We were tired, rumpled, sweaty, with stiff backs/necks/shoulders… but we had made it nonetheless!

It’s often said that life is really about the journey, not the destination. I thoroughly appreciated this quality car time with my daughter, whom I no longer see very often. We talked, we laughed, we sang a lot (yes, I do enjoy country music- just not as much as classic rock.) We drank coffee and ate snacks, and at times we just rode in comfortable silence, peacefully enjoying each other’s company.  The journey was illuminating and gratifying on many levels, and also somewhat bittersweet as I realized that we might never again spend fifteen hours together like this, just the two of us.  Yet, I have never been so thrilled to reach a destination as I was when we finally arrived in Nashville.

And, I was quite content to fly (not drive!) home two days later! 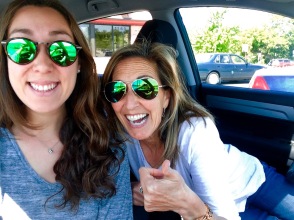 Ready to hit the road!