Several months ago, while dining in a restaurant in Santa Barbara, California, I ordered a new cocktail that would forever alter my perspective on summer drinks. Until that point, my go-to standards had been either a Mojito or Grey Goose & Tonic (both with extra lime wedges.) My first “Moscow Mule,” a combination of vodka, ginger beer and fresh lime juice, served in a chilled copper mug, would change all that! This perfectly balanced cocktail mixes many different flavors–tangy, tart, slightly sweet and incredibly refreshing—yielding a drink that is both sophisticated and approachable. 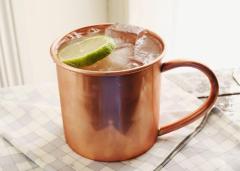 Since that initial Moscow Mule, this cocktail has become my drink of choice. Last weekend, at my daughter’s 21st birthday celebration, I ordered one at a trendy Nashville restaurant. My icy copper mug shimmered like the life of the party. Almost immediately upon its arrival, my daughter ordered another Moscow Mule, and each of her friends followed suit. Soon, our table was awash in copper mugs. The bartender told us that no cocktail starts a chain reaction quite like the Mule. He said that once he makes one and sends it out into the dining room, he expects multiple orders to follow within minutes.

At this point, my curiosity about this cocktail was piqued; I was particularly interested in the Moscow Mule mystique, and in the significance of the copper mug. My online research turned up some interesting anecdotes about the Mule…

History of the Moscow Mule

Legend has it that in 1941 at the Cock ‘n’ Bull pub in Hollywood, California, the bar owner, Jack Morgan, and a local vodka distributor, John G. Martin, were commiserating about their respective businesses. Martin was having difficulty marketing his Russian vodka to Americans. Morgan was having his own troubles selling his house-made ginger beer. The two decided to join forces, introducing a cocktail that would use both vodka and ginger beer. The bartender threw in some lime wedges, and the Moscow Mule was born! The name derives from the combination of Russian vodka (“Moscow”) with the “kick” provided by the ginger beer (“Mule”.)

Shortly thereafter, serendipity intervened again when a Russian immigrant named Sophie Berzinski arrived in California with 2,000 copper mugs she had designed in her father’s copper shop. She carted the mugs around L.A., trying to sell them, but had few takers. The new partners at the Cock ‘n’ Bull were happy to buy them, as they wanted something to distinguish their new drink. The rest is history.

And, what’s the deal with that copper mug?

The shiny, elegant copper mug is an essential element to the Moscow Mule. Let’s be honest… the copper mug itself is cool and whomever is holding it looks even cooler. But not only do the copper mugs look cool, they are, actually quite cool. The copper insulates the drink, so the ice melts more slowly and the ingredients stay cold. The copper immediately adapts to the temperature of the ice, so the vodka and ginger beer are chilled from the outside by the copper and from the inside by the ice. The colder the vodka, the smoother it tastes. And, the metal adds a tinny, earthy flavor that enhances the complexity and overall taste.

These copper mugs are easy to spot… and they are everywhere, as the Moscow Mule is most assuredly enjoying a comeback. I’m not sure if this classic cocktail was ever out, but I am hereby declaring that it is definitely in season for me this summer (and perhaps forever, now that I have my own set of copper mugs at home.) If you’d like to try my new favorite cocktail, it’s quick and easy, light and refreshing, and is sure to add a “kick” to your summer! 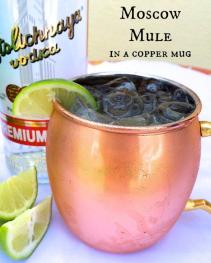 Fill chilled copper mug halfway with ice cubes or crushed ice.  Pour in vodka and ginger beer.  Add in lime juice. Garnish with lime wedge.  Stir and enjoy!  I promise you’ll be hooked!  (Note: for those who don’t drink alcohol, try the non-alcoholic ginger beer over ice with fresh lime juice… and, of course, be sure to mix it all up in a chilled copper mug.)