You’re likely thinking July 4th barbecue— a healthy, tasty grilling option alongside the traditional hamburgers and hot dogs. Yes, possibly. But I am actually referring to a different type of turkey dog. These turkey dogs are real, live, purebred Golden Retrievers from Istanbul, Turkey, who are being rescued and relocated to the United States to enjoy new lives.

As background, Golden Retrievers were once considered a status symbol among the wealthy in Turkey. A few years back, it became popular and even fashionable to own a Golden Retriever puppy, which most Turkish families bought from a pet store. (There are few traditional breeders in Turkey.) But once the pups grew up, things changed. The tiny balls of fur that parents had given their children as holiday gifts were now large, energetic dogs that many found difficult to keep in their small homes. So began the abandonment of Goldens into the streets and forests. Unlike typical stray dogs that could astutely navigate the streets, find food and fight for space, the Golden Retrievers were ill-equipped to roam free. Gentle and non-aggressive by nature, these canines were used to being with their human families and could not survive well in the cold. With few shelters available in Istanbul, the dogs would frequently starve or become prey to the thousands of feral dog packs in the forests around the city. Few lived to see old age.

That is, until the onset of Operation Turkey Dog, a program founded in 2014 to rescue these dogs and find them new homes in the United States. The program originated at Adopt a Golden in Atlanta, Georgia (“AGA.”) AGA established a large network of compassionate, dog-loving volunteers and created the process and infrastructure to bring these dogs to the US, then turn them over to caring, adoptive families.

The typical journey of a “turkey dog” from Istanbul to the United States is an arduous one. It begins on the ground in Istanbul where dozens of committed, selfless volunteers work alongside local dog trainers and veterinarians and literally drive through the streets rounding up the Golden Retrievers (along with other non-aggressive breeds) and sheltering them in makeshift doggie hotels. Once the canines are fed and their medical needs addressed, many are designated to travel to the US. While awaiting their departure dates, the dogs often spend a few interim weeks in local municipal shelters. These massive shelters house hundreds of dogs and, while life there is better than on the streets, the conditions are less than satisfactory—with both food and space scarce and frequent dog fights. Fortunately, most Goldens do not remain in these shelters for long.

Before leaving Turkey, the dogs receive complete medical exams, are spayed or neutered and are issued health certificates and pet passports. They travel on nonstop flights with Turkish volunteers who meet the US volunteers upon arrival. Multiple Golden Retriever rescue groups from around the nation—who have partnered with AGA—work together in teams to bring the dogs to their new homes in different regions where pre-screened American families excitedly wait to meet their new adoptees.

Since the program’s inception, 680 turkey dogs have been re-homed in the US and Canada, with more arriving each month. These dogs appear to be thriving and the demand for them is far from sated, as Golden Retriever rescue organizations routinely have many more potential adopters than dogs ready for placement. Adoptive families post daily photos of the dogs playing with other dogs, chasing toys and tennis balls. The turkey dogs have their own beds. They enjoy swimming, frolicking and even riding on boats! Many have canine and/or human siblings. But mostly, they are happy just loving and being loved. Simply put, they’re settling in wonderfully and are thoroughly enjoying the American life.

When I first heard about this rescue operation from a friend, I was incredulous that people could willingly abandon these sweet, gentle souls who exist solely to provide unconditional love. I immediately wanted to get involved. A few months ago, I began volunteering my time to walk and care for the new turkey dog arrivals, helping to prepare them for their adoptions into forever homes. I was amazed to see how affectionate and friendly the turkey dogs were upon immediate arrival on US soil. Literally moments off the airplane, after spending 15+ hours between holding stations, transit time and customs, their tails were wagging like crazy and they couldn’t wait to receive hugs and give wet puppy kisses. I sensed these were special dogs.

I also knew that I wanted to adopt one of these turkey dogs. My husband and I have always loved golden retrievers and had already raised two; caring for those two incredible dogs had a profound impact on our lives. After mourning the loss of our 2nd Golden last spring, we were finally ready to adopt another dog. We considered going to a breeder, but after hearing about Operation Turkey Dog, we decided this was our best option. After a rigorous application process—which included a telephone interview, home visit and several reference checks—we were approved to adopt a turkey dog through Golden Retriever Rescue Inc. of NJ. Then the waiting began… 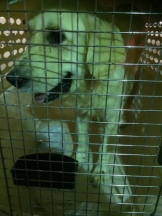 Two weeks ago, our wait ended, and our dream of adopting one of these wonderful turkey dogs was realized when our beloved “Casper” arrived at JFK airport from Istanbul, Turkey. The local rescue group had named him Casper, along with the other Halloween-themed turkey dogs: Wendy, Trix and Treat, all of whom arrived in America this October. We considered several other names for our dog, but after spending a few minutes with him and witnessing his friendly nature and playful, mischievous spark—not to mention his white coat—Casper seemed like the perfect name.

This sweet, handsome boy came into our home and our hearts. It is amazing to think that just a couple of months ago he was roaming the streets of Istanbul foraging for food and fending off attacks from dogs and other wild animals. Walking him a few days ago in torrential rain, I became misty-eyed as I realized that, instead of wandering through the forest looking for a dry, safe place to wait out the storm, Casper now has a warm, cozy home with plenty of healthy food and a family who adores him. I am saddened to think of all the other dogs who remain in Turkey, waiting for their ticket out, and the countless others who will never know a better life with a loving family. So, I prefer to focus on this one dog, our Casper, whom we were able to save. In closing, I’d like to share a favorite quote from the head of our local Golden Retriever rescue group:

“Saving one animal may not change the world, but for that animal, their world is changed forever.”

I’m so grateful we could help change your world, Casper… and even more blessed that you were able to change ours.