I grew up in a household ruled by my Dad’s philosophy that sleep was overrated and, essentially, a waste of time.  We were always encouraged to be active, not lazy, and never to put off until tomorrow things we could do today.  I have consistently lived my life in this fully engaged, procrastination-free zone, and it has been fun, though, admittedly, sometimes exhausting.

I don’t think I’ve really slept well– by that I mean more than six hours a night– in years.  And even if I’m in bed for six hours, I rarely sleep through the nights, during which I am typically battling a small bladder, menopause-related insomnia, and competing for mattress space with at least one 80-pound golden retriever.  (I am, however, an excellent car and airplane napper.)  I’ve always thought that sleep deprivation was a badge of honor, signifying to the world– and to myself– that I’m accomplishing so much that I couldn’t possibly sacrifice such heightened productivity for increased sleep.  Despite staying up very late occasionally (on New Year’s eve or for special occasions), I would still awake at dawn.  Even as a teenager and college student, I don’t remember sleeping until mid-afternoon the way today’s young people (and my own children) do.

When I became a parent, my sleeping habits declined precipitously.  By nature a worrier, I would find myself waking up during the night, rehashing my son’s baseball team’s defeat or thinking about my daughter’s upcoming soccer tournament.  I would worry about injuries and illnesses as my children endured them.  When they were in high school, I stressed over deadlines for big homework assignments, SAT preparation, and especially college applications, campus visits and then admissions decisions.  And I wasn’t even the one doing the work– I was worrying for my children and all the pressures placed on them by today’s world.  I knew these late night worries were unproductive, but I was powerless to stop them.  And I am certain that all this undue stress and worry cost me hundreds of hours of sleep.

Given this backdrop, I didn’t think I was physically capable of sleeping more than six restless hours.  Until now.  While I still think about my children and want them to be happy always, my worries about them are no longer front and center, primarily because they are no longer living under my roof.  I would probably not approve of everything they are doing in college, but what I don’t know about, I cannot worry about.

Fast forward to last night.  I was exhausted and kept dozing off during an episode of House of Cards (hint: if you’re dozing off during House of Cards, it is time to go to bed!)  So, very uncharacteristically, at 9 p.m. I turned off the light and went to sleep (my husband continued watching House of Cards without me.)  I slept uninterrupted until 5:30 a.m., then dozed another hour until 6:30.  This was a first for me: 8-1/2 hours of continuous sleep for the first time in years– probably since becoming a parent nearly 21 years ago.  How great it felt to awaken for once feeling rested and refreshed!

At 6:30 this morning, my brain was fully activated, already thinking about the day ahead, and filling quickly with plans and ideas.  My usual mug of coffee, a long, brisk dog walk, and I was ready to tackle the day.  Ah, to be a morning person AND to be fully rested.  This was a first for me, but hopefully not a last.  I look forward to many more restful nights ahead.  In this new stage of life, I have discovered that I quite enjoy sleep, and find its counterpart, sleep deprivation, to be completely overrated.  Bottom line, in the words of Fleetwood Mac, “I’m never going back again.” 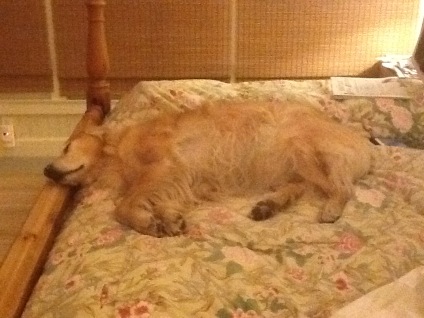 One thought on “Sleep deprivation Is overrated…”