Belvedere, California…A picturesque seaside town, less than one square mile in size, just four miles north of San Francisco. Belvedere sits on the south side of the Tiburon peninsula between Richardson Bay and San Francisco Bay, with panoramic vistas of the Bay Bridge, Angel Island and the Golden Gate Bridge. The water views, homes tucked into the hillside and narrow, winding streets with names like Beach, Bay View and Bella Vista, are vaguely reminiscent of the quaint towns along the French Riviera. For those who enjoy and appreciate the outdoors, Belvedere is pure heaven.

My husband and I were fortunate enough to be staying in this idyllic place for two weeks. Exploring the neighborhood on our first day, we noticed a hand-painted wooden sign marking the entrance to a narrow upward stairway. As we meandered, we saw other painted signs and accompanying stairways. Later that day, my curiosity led me to venture up one of the stairways known as Cedar Lane. As I climbed the first few steps, my adrenaline surged… I felt as though I was heading up a secret passageway into a bygone era. 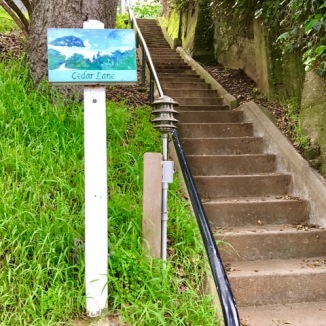 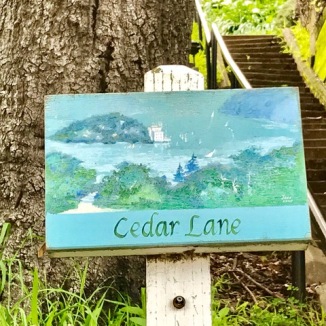 I counted 176 steps to the top of Cedar Lane. After a few minutes of climbing, my pulse had quickened and I was breathing heavily. Not only was this a terrific workout, but also, I was intrigued by the stairways… how many of them existed in Belvedere? What purpose did the stairs serve? Were they all similar or different? And, most importantly, would I be able to climb all the stairways during my stay?

A quick Internet search further piqued my interest in these secret stairways. First, I learned that the locals refer to the stairways as the “Belvedere Lanes.” There are 17 lanes in Belvedere. They comprise a network of stairs and pathways that connect the roadways on the two islands that make up the town of Belvedere: the smaller Corinthian Island and the larger Belvedere Island. The shortest lane has just 4 steps and a passageway, and the longest boasts 195 steps. One of the lanes isn’t actually a stairway at all, but a steep ramp connecting one dead end street at sea level to another road high atop a cliff.

According to historical accounts, in the early 1900’s, Belvedere was a welcome summer retreat for San Franciscans seeking a milder climate and easy water access. Residents arrived by boat from San Francisco and used the stairways to reach their summer houses. Today, the lanes provide passage to areas that are difficult to reach by car via the narrow and hilly streets of Belvedere. They also serve as a means of escape during natural disasters like earthquakes and fires. Many local residents enjoy hiking the island through the passageways of the lanes. And, since I was now a bonafide local for two weeks, I decided that this would be the perfect way to explore Belvedere.

The entrances to the lanes are marked by charming, hand-painted wooden signs. The colorful signs, created by local artists, depict the flora, fauna and beautiful landscapes found in Belvedere and Tiburon. Some of the lanes, like Cedar, Woodwardia, McLean and Woodlands, are divided into upper and lower sections, each marked with a distinctive sign. Every lane is unique. Some lanes are lush and green, others are heavily wooded, and a few are simple utilitarian connective passageways between homes. 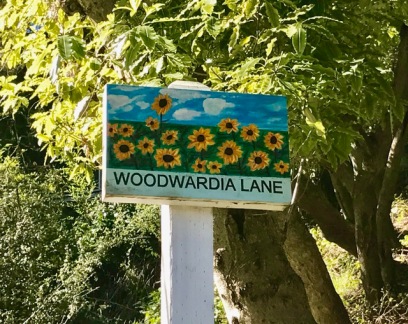 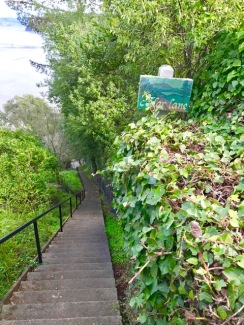 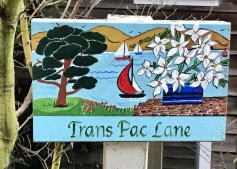 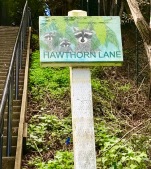 I spent my first few days in Belvedere exploring the lanes, a few at a time. By day three, I had been up and down every lane at least once. I was now officially obsessed. A local shopkeeper advised me that residents hike the lanes for exercise, traversing the entire network in one go-around. I decided to attempt this feat the next morning. Following the local protocol, I started at the San Francisco Yacht Club at the base of Belvedere Island, then followed the lanes up and down in order, beginning with Lower McLean, then moving right to left as I tackled each new stairway.

The next hour and a half provided many, highlights, surprises and adventures. Hawthorne Lane offered two pleasant surprises. First, the painted sign depicted a boy walking his golden retriever along the water, which, as a golden retriever lover, warmed my heart. Then, midway up this stairway, I discovered two miniature parks with wood benches, statues and a memorial plaque. 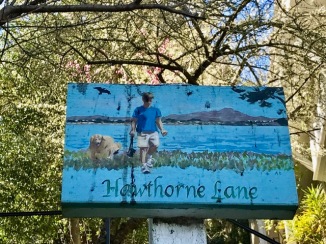 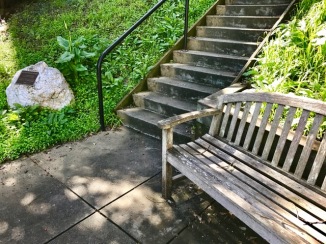 The sign marking the entrance to Upper Woodland Lane depicted a powerful soaring eagle. This lane, lined with tall trees, shrubs and ferns, featured a rustic wood stairway and evoked a dense forest. 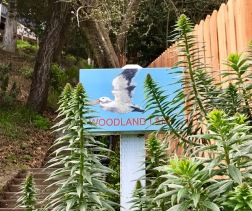 Another wonderful surprise came at the top of Pagoda Lane. At its entrance, this stairway appeared to be an unassuming ramp with just six stairs, but quickly morphed into a monster climb of 190 steps straight uphill. Waiting at the top of the stairs was a white golden retriever named Maverick (ironically, a virtual twin and namesake of my former beloved dog!) He greeted me with excited barking and then followed me on the next three stairways, until I eventually walked him back home. 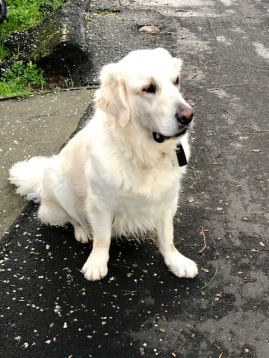 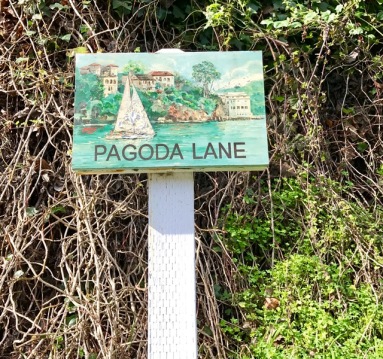 My most challenging stairway was Harry B Allen Lane, but not because it had the most steps. This lane is designed as a steep metal stairway leading down from Beach Street to the harbor and rocky beach below. The stairs are open grates so as you walk you can see the ground below… a frightening proposition for someone like me who is prone to bouts of Vertigo. After meticulously counting 104 stairs and finally touching ground, I breathed a deep sigh of relief. Moments later, I was rewarded with an extraordinary selection of beach glass that had washed ashore during a recent storm, making this intense descent and return climb completely worthwhile. 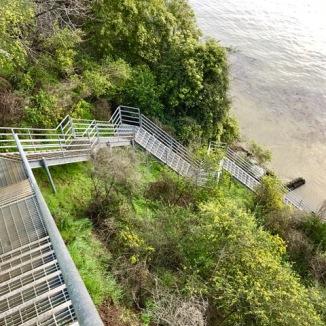 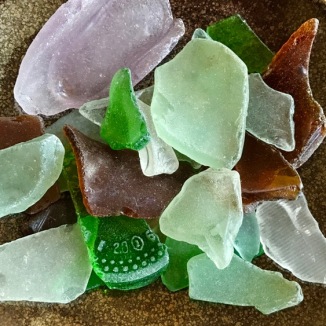 The Lanes of Belvedere comprise 1,888 steps. All these stairways together, plus the roadways in between, span a total of 4.2 miles. Not a bad workout in a town that’s less than one square mile in size!

Hiking the lanes proved to be a fun and exhilarating experience as well as a perfect way to get acquainted with this magnificent area. The best part was that this exploration combined many of my favorite interests and passions—adventure, history, curiosity, artistic expression, and rigorous fitness—all in one outing! The ultimate in multi-tasking.